CRIME AND THE CASTLE vol 2

News
CRIME AND THE CASTLE vol 2

CRIME AND THE CASTLE Crime weekend!

A November weekend in a medieval fortress will not resemble a carefree sightseeing. Patrons of the darkest stories and almost perfect crimes will roam the castle corridors. They will represent those who were the only witnesses to the murders, those whose testimony will forever remain silent. They are the ones who penetrate the mad minds of the greatest sadists and psychopaths who live among us. As long as the investigation continues, the analysts become tenants of the crime.
Thousands of files, inspections, reports, sections and still the same questions: who and why?

Madness in deeds, fear in deadly constricted pupils – this is how the pursuit in the shadow of crime begins. Time is not an ally, perhaps right now it is running out for the next victim…
For the second time, the Czocha Castle will become the seat of the harshest facts, intertwined intrigues, faint traces and unbridled evil. All this will be told by eminent guests, including crime masters, investigators from the X-Files, journalists, technicians and many others.

Interesting lectures, conversations, analyses, deductions – all this served alongside a dark crime game where each of the participants can turn out to be an apache. A surprising crime cannot remain in the shadows. Players will make their way through a dense fog of many threads to finally catch up with the murderer.
Additional emotions can be provided by the Secret of the Outskirts – the Room of Escapes, a place that was once decided to be forgotten. Even though the Outskirts had been closed for years, the concierge could have sworn he heard a soft plea for help as he passed by…
In addition, the Castle has prepared a detective game and a play area for its youngest guests. 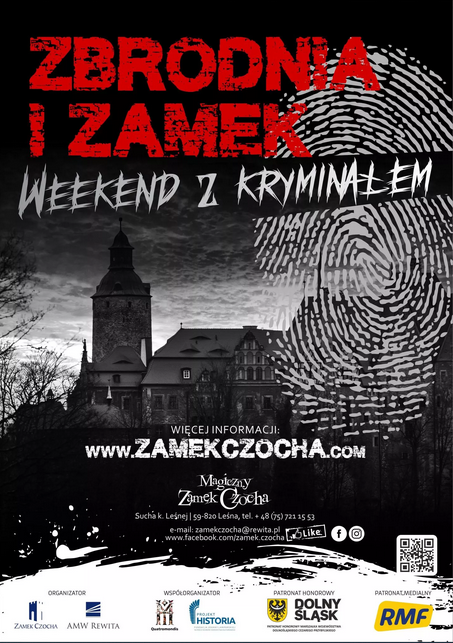